Below are some links to related web sites. 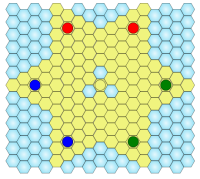 http://www.ajaxbattle.net/ AjaxBattle is a multi-player real-time strategy game for 2 to 4 players. It is a web-based version of the old X-Windows game xbattle. Works best with Firefox 2.

http://uboggle.appspot.com/ uBoggle is a app to play Boggle – the popular word making game.

http://mnk.appspot.com/ This game lets users set up most types of x-in-a-row type games – can be played against another online player, or the computer.

http://games.wtanaka.com/ Card and board games.

http://www.guessasketch.com/ A multiplayer game where players guess what other players draw.

http://photomunchers.appspot.com/ and http://jamendogame.appspot.com/. These two games are really ways to get users to tag images and music, respectively. They illustrate how to tap into other networks.