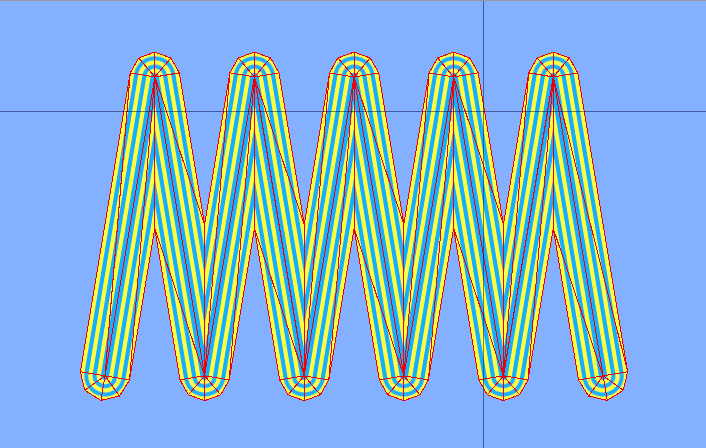 A lines is a fundamental graphics object, but generating attractive, robust lines involve many subtle issues and can be difficult to get right.

In this post I show some examples of rolling out your line meshes. To develop a full-fledged multi-purpose line solution is a big project, in practice you will usually build a solution closely tailored for your application. Here we will look at a few specific-purpose solutions to go over some of the main concepts. You should be able to put these together into something that is suitable for your own use-cases.

This post builds on Generating procedural meshes in Unity. Since writing that post, I realized I missed some steps in the process I proposed.

Here are the steps used here:

However, when we break down our calculations into primitives, we follow a different path from step 4 onwards. Here are the steps I used to design the mesh builders for this post:

I also realized the “trianglesPerRad” is a silly metric to use since it is so hard to visualize radians. Instead, use trianglesPerRevolution. I always start with raw triangleCount for sectors, and convert that to a calculated amount once the whole thing is working.

Geometric code always have lots of annoying cases where the naive solutions breaks down. It is not uncommon to have more “special case” code than normal case code. It is especially tricky because it is hard to exhaust all the special possibilities.

When it comes to line code, here are some situations that can cause problems.

Too few points. For example, the broken line mesh builder below checks for intersections of two lines parallel to consecutive segments, which means at least three points is required. Special code is required if there are fewer than three points. You can usually see this situation easily in code

Points that are too close. This is a problem if we need the direction of the segment between the two points, for example, to calculate a perpendicular.

Lines are very thick.  Thismay cause lines to overlap themselves in unexpected ways, messing up the triangulation.

We will be using some generic methods to generate shapes we use across multiple builders: quads and sectors. We looked at both of these in the previous post.

In the previous post, I used a base class that was suitable for building simple meshes. However, it is not great for meshes made from different parts. Instead, these are the main classes to support the builders for this post. Sourcecode is given at the end.

(This is still not the setup I will use for a library. I would prefer to be able to have MeshData objects for primitive shapes, and compose those using a generic builder. That is for a future post.)

Here we will look at three types of line builder:

A line segment with round end points

A line segment with round corners is simply a long thin rectangle with two half-circles stuck onto two opposite sides, which means we could use the square and circular sector meshes of the previous post if we wanted to. Here we will do it from scratch, although the thinking is the same as for the previous meshes.

Decide on primitives: Two sectors and a quad.

Form a series of points that represent consecutive line segments, we make a shape as follows: For each segment, we raise two perpendiculars, one on each side of the segment, half the line width. Through these, we find two lines parallel to the segment, one on each side. The points where consecutive lines on the same side of the broken line intersect are the join vertices. For the end points, we use the perpendiculars raised at the end points and half the line width.

Decide on the parameters: points that represent the nodes of the line (i.e. end points of segments that make up the line) and line width.

Assign vertices: We do it as shown in the image.

Calculate the vertices: This is explained in the paragraph above. If the angle between consecutive segments is almost 180 degrees, we use tops of perpendicular instead of intersection points. The other near-parallel case (when the segments form an angle of almost 0) is not handled. I fix is possible, but would be difficult, and I did not attempt it.

Calculate the number of vertices: 2 * pointCount.

Calculate the triangles: Each segment of the broken line is made of two triangles

Calculate the number of triangles: 2 * (pointCount – 1)

Calculate the UVs. The simplest idea is to use only two UVs: (0.5, 0) for bottom vertices and (0.5, 1) for top vertices. We can also calculate stretch the texture proportionally over the line by using the following UVs: (u_i, 0) for bottom and and (u_i, 1) for top, where

Line with Round Joins

This line is much more complicated to generate. It follows the same idea as the previous mesh builder; we calculate intersections as before. But we do not use this for both top and bottom vertex. If one of them is convex, we replace the corner there with a circular sector, as shown in the picture below.

We break the mesh down into quads and sectors. As you can see, for the non-looping version, there is two quads per segment (this 2(pointCount – 1)), and one sector per point (this includes two sectors at the end points). Notice that the two vertical segments of each quad is either from point to intersection, or from point the top of a perpendicular raised at that point. The sectors also all lie between perpendiculars raised on the points. This gives as all the information we need to calculate the shapes; the trick is to keep track of whether to use the sector at the top or bottom (if at all).

Potential special cases: same as before.

Decide on primitives: Sectors at each end point, a sector at each convex join vertex, and two quads per segment.

Each quad has two corners made from the input points, and the remaining two points are either points of intersection (the same points of intersection calculated in for the broken line with sharp joins), or the top of a perpendicular. The tricky part is to keep track of which we should use for a particular quad. There are some details for special cases, but the overall test is done by taking the perp-dot product of consecutive segments, and see whether they are positive or negative. This essentially tells us whether the second segment lies to the left or right of the first segment, and therefor whether the angle between them is obtuse or not, and therefor whether the top or bottom join vertex is convex.

Use degrees in the inspector and radians internally. It is hard to visualize the size of radians, and you cannot easily specify special angles such as 90 or 60 degrees. But internally (for math calculations, it makes more sense to stick to radians. My convention is to add inDegrees to variables that represent angles in degrees. I only use inRadians for angles that have both an inDegrees and inRadians versions.

Consider keeping looping and non-looping implementations separate. It is sometimes easier to develop the looping and non-looping versions of a mesh builder separately, keeping them together with appropriate is a brain tax you don’t need to pay. Once you have both working, you may refactor so that shared code is not duplicated, but even then I am not sure it is a good idea. The branching can make the code much harder to understand.

To convert non-looped to looped:

The process is not completely general, you have to analyze it for your specific case.

Do not try to make the code as general as possible (unless you are writing a library for other programmers). Writing robust geometric code is exceptionally hard. If your game is 2D, then make your code only work in 2D. If you know all your points are “nice”, don’t cater for non-nice situations. If you know your code will always generate at least three points for a line, don’t worry about degenerate cases. If you only need loops, don’t implement non-loops.

That said, if you can spot problematic cases:

Do not try to share every vertex that is shareable unless you have to. In our line builder with round joints above we broke the line up into multiple components. This made the code much easier to write. The downside is there are a few redundant vertices, which in theory is somewhat slower. (You will have to work though to see the difference.) Even if you need a super-efficient implementation, it’s always better to start with a correct (potentially unoptimized) version that can be used as a reference implementation for something faster. And a correct version may also be easier to modify into a faster version than trying to build it directly:

Give thoughtful variable names.  The mathy nature of geometric code can dupe programmers to give math style names – single letter names – which makes the code more compact, but harder to understand. And it can be tricky to name intermediate calculations. Here is my approach to naming in this type of code. (Note, my code is consumed by our small team. Code meant for a wider audience need to have an even more robust naming strategy.

Test for (almost) zero-area triangles. Test the area of each triangle once it is created, and make sure it is above a threshold. Print a debug message or throw an error with the vertex indices and coordinates of very small triangles. This will help flush out three classes of errors:

The area of a triangle ABC is given by half the magnitude of the cross product of vectors AB and AC.